The hijab row in Karnataka, India is usual political distraction from burgeoning issues like soaring unemployment, depressed economy and corona related deaths and hospitalizations yet to be contained in many parts of the country.

The fundamentalism and radicalized religious zealots –  Hindutva RSS run BJP governments in New Delhi and other states like Karnataka are consumed with communal politics fomenting and fostering polarization.

The Indian tradition is observed by significant percentage of Hindu women in North, East and West India. They cover their head with the extension of their sari or the long scarf adorned over salwar kameez attire. They wear red or other color dot on their forehead and apply red powder on their hair parting after marriage. The majority in urban and rural towns cover their head in public and at home.

The North, East and West Indian states having adopted Mughal customs to cover their head and face in this respect practice the tradition till today. The weddings in these regions are also adapted from muslim rituals like the weddings taking place at night, the groom wearing a head dress and veil covered with flower strands or beads depending on the choice is common.

The veil hiding the image of the wearer i.e. the bride and the groom in this instance is proudly continued in north, east and west Indian weddings until now. Again all these cultural practices are directly from muslim influence in India following Mughal rule in these regions.

South Indian traditions are opposite in this respect. The reason is South Indian rulers maintained their cultural identity even though Mughal or muslim rulers extended their power in Karnataka and Andra Pradesh etc.

The latest controversy with hijab in government run college or schools classroom is nothing more than political opportunity for all those banking on the Hindu – Muslim and caste based divisiveness.

In fact, the women in Rajasthan, Gujarat, Maharashtra, West Bengal, Uttar Pradesh, Bihar, Punjab and Central India cover their heads as a bride and continue after wedding for the rest of their life. The trend is prevalent among many Hindu, Jain and Sikh women in India.

Furthermore, the young girls in middle class and lower income groups adhere to modest traditional appearance at all times to protect not only their honor but also the family honor in that demography.

In isolating young muslim women from similar cultural social background barring them from wearing head scarf in the classroom is discrimination and apathy to their fundamental rights and personal choice.

The more such bias and partisan decisions are made against citizens viewed through the prism of saffron politics, the deeper the divide endangering national unity, peace and security.

State intervention in individual lifestyle under the pretext of uniformity not necessarily enforced across the spectrum considering the choices exercised by others in society whether in classrooms or public domain is undemocratic and unconstitutional.

Interestingly, the BJP political party in power at the center and state government shunning secularism is widely known. That being the status with them, they insisting on secular concept in this particular hijab rights raise credibility factor concerning Hindutva and selective secular stance.

Such politics highlights neither here nor there situation besides little or no respect for constitution guaranteed individual liberty and religious freedom.

Here are some pictures of me on the camel (the last picture in the display) and other Indian women of Hindu and Islamic faith with head covered per traditional preference.

Hindu women from Rajasthan. The head and hair covered in addition to all of them wearing the dot on their forehead. 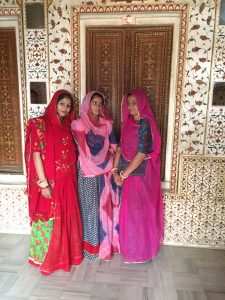 Indian Sikh Groom with the veil and

Indian Muslim in Burka with hijab.

Me – Padmini Arhant with head covered and wearing red dot on the forehead. The image taken in 2016, Jaisalmer, Rajasthan, India. 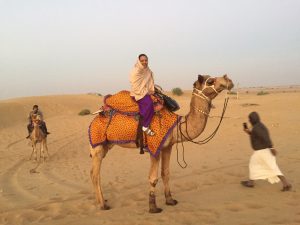